Already for a long time I have enclosed the mini into my live. As a young kid I’ve seen rallycross and other races were mini’s race.  Later I started my own racing career as a slalom driver. Building and racing my own mini. Around 2000 I came with the idea of looking for the drivers from the past. First it started just with photo’s, but later also trying to meet the drivers. One of these encounters is this all about. 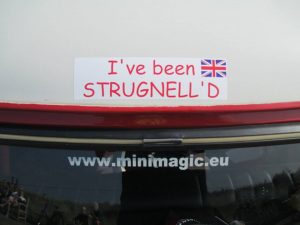 Well his name is Graham Strugnell. Some great story’s to be told about him.

2012. We tryed to meet up for the 2012 mini festival at Brands Hatch. It looked to be a hard one to do. Graham just recovered after a big illness. So it was not sure he would come. But when he would be there Graham would steal my mini and would use it on the rallycross track. As this where his own words. Well “if you come I have a surprise for you, if you steal my mini I don’t ”

So finally we met at Brands Hatch. And he didn’t steal my mini. So I had a surprise for him. From the photo’s I got the year before I made a big poster from one of the photo’s. a great surprise for Graham as he never thought about it that I brought something for him. 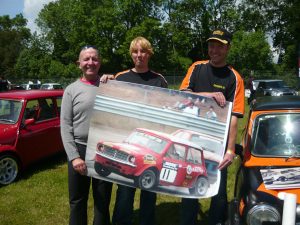 Together with my good friend Bonnie we gave him this rallycross poster of his rallycross car. I’ve you make a big man cry you know you did the right thing. It was great meeting Graham Strugnell that day. A day never to forget. So now every year we meet at Brands Hatch. Drink a beer. Talk mini and having lots of fun. 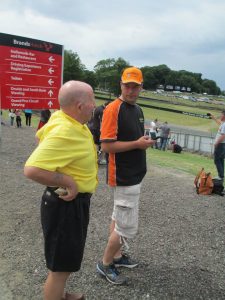 Me and Strugger. At one of the many years we meet.

Well I dazzled you with the first photo? “I’ve been Strugnell’d ”

It can be read in different ways. Yes I’ve been Strugnell’d the last few years. What a friendly man. But Strugnell’d has also a little different meaning, but that goes back to the racing years of Graham. Graham was, well let’s say , a gentle driver who notched some drivers of the circuit. If your car was facing the wrong way and you didn’t see a mini in your rear view mirror, it could be 100% you’ve been Strugnell’d. 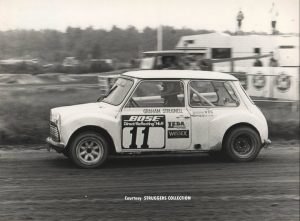 Just a photo of Grahams own archive. So many more photo’s of his rallycross career to show. So will this be the last time I write about Graham? I don’t think so.

Hope you liked this little story. More to follow more people to introduce.