It was early saturday morning. Long drive to Circuit Spa. I had a good companion for the trip. So it wasn’t a boring trip. My longtime mate Willem wanted to go also to Spa. So better together then alone.  We were early at Spa. Nearly everything was quiet. Well that clanged in coming hours. Son the first races started. We missed out on the first race where a MKII morris mini raced.

Soon the mini’s lost contact with each other. But every mini battled it’s own race. Guest driver Neil Slark drove the mini of Roger Ebdon. He really was flying with the mini. close to big Jaguar XJS. 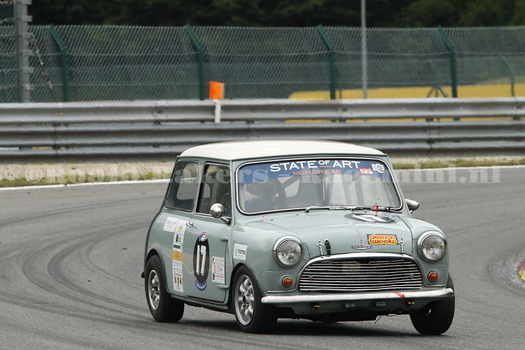 Sadly Timo Span in his 1275 gt had clutch problems. This should be his first race on saturday after a major rebuild, but it ended already in the 1st lap.

To bad they race just 2 races in the weekend here at Spa. So race 2 i couldn’t see.

But there was more to see. I love this brave Trabant racer.

He raced against this beast.

So you could imagine the speed difference. Just to see in best laptimes. Mucke in the Capri did a best lap of 2.35.7 the Trabant of Albert Westerhuis did a 4.13.6 so nearly 2 minutes a lap slower. But still a great effort to race this Trabant around the European circuits.