Already in the story of Graham Strugnell I tolld you I followed rallycross in the early day’s. Well early it was as I had the age of around 8. We visited some rallycross races in Valkenswaard. And as a kid I already liked the mini’s go as fast as they can go. But in one of these races my eye got caught on some purple mini’s, don’t know why but they did. 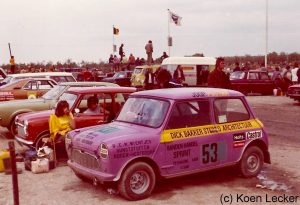 After one start I lost a purple mini. It didn’t came trough the first lap. So I had to have a look where this mini was and why it ended it’s race. Well that wasn’t a long walk. Already in the first corner the mini lost it’s wheel and couldn’t continue.  Well if you think the story ends here then you are wrong.

Over the years I forgot about this incident until some 40 years later. I got to meet Koen Lecker through FB. And he tolld me he did rallycross in those days. Well he didn’t race the cars, he was Team manager of some rallycross mini’s. I told him I remember some things from those day’s . So I told him the story about a purple mini that lost it’s wheel after the start. I think Koen started smiling “yes I remember that” I was a little quiet as I didn’t expected that. So he told me that this was one of the cars of the team he ran those days. 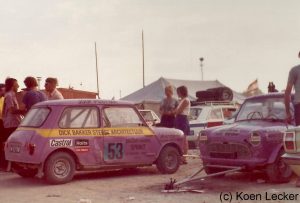 We met some time later and he showed me some more photo’s of the team cars. Think Koen has so many story’s to tell not only mini. Koen is a well  traveled man. As he sailed the 7 seas but was also very busy for the Dutch mini club.

The team didn’t had only the purple mini’s one of the mini’s had a Balena 180 engine in it, and the next photo  is a special they raced in those days. just chopped of it’s roof to make it lighter. 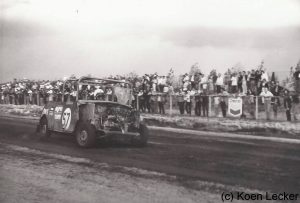 One day more photo’s of Koen and his team and maybe some more story’s, but for now it will end here.

If you like this part “memorable ecounters” just write a comment. There are so many story’s to tell of drivers and cars from the past.

Next will be the Mini7 and Miglia’s at Zandvoort 7/8 july.