8 and 9 July a weekend to remember.

Saturday morning was used to for qualifying. Rupert Deeth put his Miglia on pole with 2:00.032 (average 129km p/uur) In the Libre class Ian Fraser put his mini on pole. Mini7 pole was in hands of Darren Thomas closely followed by Nick Croyden Fowler in his S-class mini. The heat was on, not only in the car but also the Netherlands showed it’s best weather. Temperatures were high. Cars and driver needed to recover after qualify. 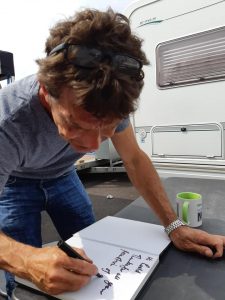 For me it was time to have a little chat with my own driving legend Bill Sollis. As he wrote a book a long time ago I finally found time to let the book sign by Bill. Great to have a chat with him. And talked about the fastest mini in the world race from 1994 at Silverstone circuit (story will follow).

Many drivers liked the circuit but how was the circuit in the past. Well had to show many times what the layout was for a long time and how it now is. Great to tell a little about the story of Zandvoort.

It was time for race one. 37 cars started this 25 minute race. A close battle followed in all classes. Slip streaming on the straight, out braking each other for the corner. little late braking for some to early. Not all cars came unharmed from the track. Greame Davis crashed is mini after Gerlach what caused the red flag. Due to this red flag some surprises. 3 drivers had their maiden win. Ian Fraser’s hard work in the last few years payed off. finally victory in the Libre class.  Thorburn Astin won mini 7 S class. And Joe Thompson ad his first win in his mini 7. Well done. The Miglia honor went to Rupert Deeth.

Race 2 on Sunday was a little different. Even the clouds where gone. So temperature even higher then Saturday. There was plenty of time to enjoy the sun, as the race was at 12.25 So Paul Simmonds got us a english breakfast. That started the day well. A lucky member of the mini seven club could drive the pace car. Well she could use her own mini. Advise was not to drive to slowly. Bonnie did her best and outpaced the miglia’s. They where good up to speed to get the temperature into the tires.  But what happens after the start was not thinkable. close racing. Not giving an inch to the other drivers made this race one of the best of the weekend. Cheering, applause and oohhss and aahhsss you could here from everywhere. The battle for the LIbre class was close. Ian Fraser and Phil Harvey battled for 1st in class. A great battle followed for 12 laps. closely followed by guest driver  Pieter van Cleemputte. Who has changed his engine the night before with the great help of Miniprojects.nl Great job and that’s what is racing mini’s is all about. Friends for ever. Finally Phil Harvy won libre class. Mini 7 s class was for Nick Croyden Fowler.

Mini 7 win in race 2 went to Andrew Diveny, after a bad start in qualifying where a wheel broke of his car this was the icing on the cake. 2nd Dom Burger followed by Tom Sanderson. The Miglia battle was a hectic one. Due to some yellow flags the end results came a little late. It’s a long race and after a few laps the miglia’s catching the mini 7 quickly. There where some incidents in this race. Dirt gravel on the track made racing more challenging.  Finally Gordon Peacock one the miglia race. 2nd Dave Drew and 3rd Alfie Brown.

A special note to Leon Oliver Window with what I think was one of the most spectacular moments of the race weekend. He did his best to show the roof. Little to hard on the curbs caused him to drive on 2 wheels. Great job Oliver.

And that was already the end of this racing weekend.